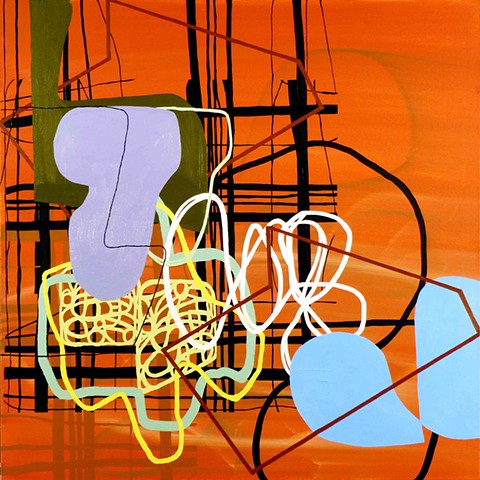 “Nothing is more modern, in some large sense, than daring to exhaust resources, to blow one's very method, only to come up with one more thing worth trying.” -Joseph Masheck

“Painting and art have never had the same agenda, art is a much newer argument than painting. Painting has been around for 25,000 years, painting is commemorative. Art is a kind of discourse that in a funny way seeks to do away with itself.” -Stephen Westfall

“I try to push it to the point where I don’t know what I’m doing because that’s what I trust the most...people are on the whole afraid to be bewildered in front of a work of art. But it’s a prerequisite that good art demands that you wonder ‘what the hell is this?’ and you’re bewildered by it. People are afraid to enter that state, and so they come up really fast with reasons, equations for things.” -Robert Gober

I’ve been making abstract paintings for over 20 years now, and I find that I like being part of the ancient continuum of painting as well as the somewhat newer continuum of abstraction. I believe that both painting and abstraction -- far from being exhausted, irrelevant or dead -- still contain limitless fresh possibilities.

The point of these paintings is what they look like – a communication at once direct and mysterious. In the purest sense, these paintings are “about” the abstract emotional effects of line, color and form.

They are produced through equal parts improvisation and careful planning. I am willing to try everything, holding fast to what, for me, rings true.

Visual ideas and systems are rearranged and recombined until the pictures seem to “work”: the tensions feel correct, the elements fall imperfectly into a satisfying and/or dissonant relationship, and a sort of music begins to take shape. Then the painting is done and I go on to the next one, trying to learn from this logic without copying previous pictures.

My method is recombinant -- ideas may jump around from painting to painting, but what I am after in each painting is a strong, unexpected, singular image. One willing to live or die according to its own rules.

"There is only one valuable thing in art: the thing you cannot explain." -Georges Braque